1923 – Receiving apparatus constructed and working; aerial erected at the school, Castle in background.  Reported in The Wireless World and Radio Review, Sep 26, 1923 p. 876).

First project was a valve audio amplifier with pair of tetrode valves in push-pull.

"For myself, moving back in time just a little, my first interest in wireless and electromagnetic waves and all such things came in 1952 or thereabout when I found a book in the Heriot's school library – probably printed thirty years earlier – describing the wonders of very early wireless techniques. This book explained the functions of crystal sets, and of such long-forgotten devices as the Self-Restoring Coherer, which was, as far as I could gather, a very early form of radio signal detector, probably invented before I was born and abandoned not long afterwards.   Nonetheless I was fascinated. The whole concept of radio - or wireless, as we called it in Britain in those days - appealed to me.

I think it was in 1953 or early 1954 that Heriot's school started its very first Radio Club for after-school enthusiasts. I was a founder member. I think our first project, and the only one we undertook that year, was to build an amplifier. Needless to say, it was a valve-based device of which I can remember little, except that the output stage was probably a pair of tetrode valves working in Class B push-pull. (I ask you to forgive these minor technicalities; they are important to the historical progression of this note.) I left school before the amplifier was actually finished."

1979 – Mr Balfour made several contacts with UK and Europe using the club’s transceiver. 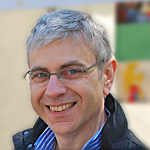 Article compiled by Alan J Masson GM3PSP from input kindly provided by some of the above names.

I would be delighted to receive any additional material for this item.